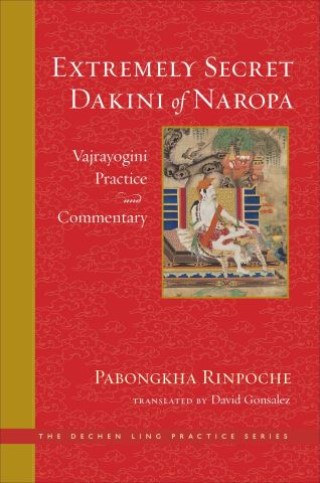 The Extremely Secret Dakini of Naropa

A thorough and sparkling translation of an essential commentary on one of the most profound practices of Tibetan Buddhism.

The Extremely Secret Dakini of Naropa has become the basis for almost every subsequent Vajrayogini commentary in the Gelug tradition. Kyabje Pabongkha’s commentary is both very thorough in its presentation and deeply inspiring, providing rich detail on essential elements of Vajrayogini practice:

"This is a teaching that practitioners can use to transform themselves into a buddha, like the artists who shape beautiful images out of raw materials."
—Gelek Rimpoche

Dechen Nyingpo Pabongkha: Pabongkha Rinpoche (1878–1941) received his geshe degree at Sera Monastic University. He was the root lama of both tutors of the present Dalai Lama and profoundly influenced many of the Gelug lamas who have been instrumental in bringing Dharma to the West.

David Gonsalez was the translator of numerous sadhanas and texts and served for many years as the personal translator and attendant for Gen Lobsang Chophel. He was the president of Dechen Ling, a nonprofit organization that works with the Tibetan community in exile to establish their monasteries and traditions.