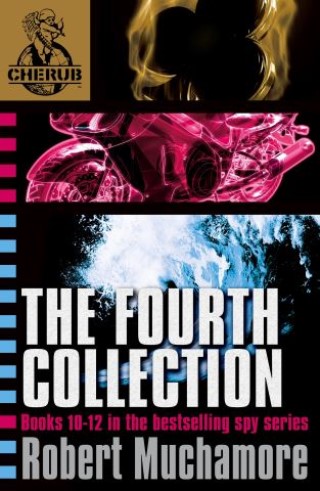 Books 10-12 in the bestselling spy series

The General (Book 10):
The world's largest urban warfare training compound stands in the desert near Las Vegas. Forty British commandos are being hunted by an entire American battalion.

But their commander has an ace up his sleeve: he plans to smuggle in ten CHERUB agents, and fight the best war game ever.

Brigands M.C. (Book 11):
Every CHERUB agent comes from somewhere. Dante Scott still has nightmares about the death of his family, brutally murdered by a biker gang.
Dante is given the chance to become a member of CHERUB. But when he joins James and Lauren Adams on a mission to infiltrate Brigands Motorcycle Club, he's ready to use everything he's learned to get revenge on the people who killed his family ...

Shadow Wave (Book 12):
After a tsunami causes massive devastation to a tropical island, its governor sends in the bulldozers to knock down villages, replacing them with luxury hotels.

Guarding the corrupt governor's family isn't James Adams' idea of the perfect mission, especially as it's going to be his last as a CHERUB agent. And then retired colleague Kyle Blueman comes up with an unofficial and highly dangerous plan of his own.

James must choose between loyalty to CHERUB, and loyalty to his oldest friend.

Praise for the CHERUB series:

'Punchy, exciting, glamorous and, what's more, you'll completely wish it was true' - Sunday Express
'Crackling tension and high-octane drama' - Daily Mail
'A really good book that you could re-read over and over again' - Guardian
'Pacy writing, punchy dialogue and a gripping plot, it's got it all' - Daily Express
'Fast-moving action ... and cool gadgets!' - The Times