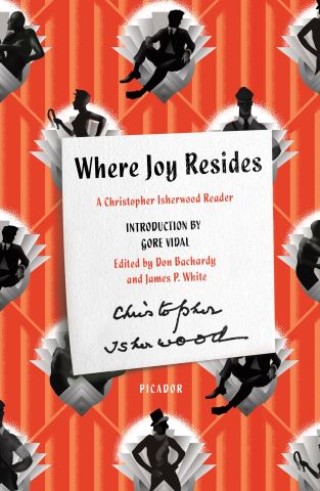 Best known for The Berlin Stories—the inspiration for the Tony and Academy Award-winning musical Cabaret—Christopher Isherwood (1904–1986) was a major figure in twentieth-century fiction and the gay rights movement. Where Joy Resides is the perfect introduction to the author's essential writings.

This collection presents two complete novels, Prater Violet and A Single Man; episodes from three other novels, Goodbye to Berlin, Down There on a Visit, and Lions and Shadows; along with excerpts from Isherwood's nonfiction works, Exhumations, Kathleen and Frank, and My Guru and His Disciple.

Christopher Isherwood: Christopher Isherwood (1904-1986) was born outside of Manchester, England. His life in Berlin from 1929 to 1933 inspired The Berlin Stories, which were adapted into a play, a film, and the musical Cabaret. Isherwood immigrated to the United States in 1939. A major figure in twentieth-century fiction and the gay rights movement, he wrote more than twenty books, including the novel A Single Man and his autobiography, Christopher and His Kind.