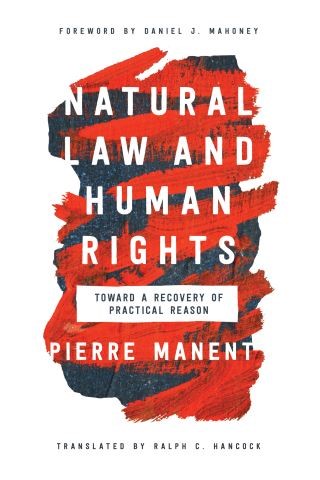 Toward a Recovery of Practical Reason

Pierre Manent is one of France's leading political philosophers. This first English translation of his profound and strikingly original book La loi naturelle et les droits de l’homme is a reflection on the central question of the Western political tradition. In six chapters, developed from the prestigious Étienne Gilson lectures at the Institut Catholique de Paris, and in a related appendix, Manent contemplates the steady displacement of the natural law by the modern conception of human rights. He aims to restore the grammar of moral and political action, and thus the possibility of an authentically political order that is fully compatible with liberty rightly understood. Manent boldly confronts the prejudices and dogmas of those who have repudiated the classical and (especially) Christian notion of “liberty under law” and in the process shows how groundless many contemporary appeals to human rights turn out to be. Manent denies that we can generate obligations from a condition of what Locke, Hobbes, and Rousseau call the “state of nature,” where human beings are absolutely free, with no obligations to others. In his view, our ever-more-imperial affirmation of human rights needs to be reintegrated into what he calls an “archic” understanding of human and political existence, where law and obligation are inherent in liberty and meaningful human action. Otherwise we are bound to act thoughtlessly in an increasingly arbitrary or willful manner.

Natural Law and Human Rights will engage students and scholars of politics, philosophy, and religion, and will captivate sophisticated readers who are interested in the question of how we might reconfigure our knowledge of, and talk with one another about, politics.