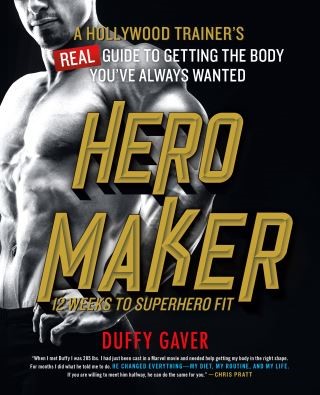 Former Marine sniper and ex-navy Seal, Duffy Gaver is the unsung hero of Hollywood. As a master trainer to the stars, he has transformed the bodies of actors such as Chris Hemsworth, Chris Pratt, Scarlett Johanson, Brad Pitt and many others. He is a Hero-Maker. He gets the most out of his clients by making them rethink their lives. For Duffy, the fitness industry sells a myth: it's all about the latest and greatest fads. Back in 1965, Larry Scott won the first Mr. Olympia. There was no Nike. No thermogenic products. No supplement industry. How did he do it then? With his will, his discipline, his desire. The things that big businesses can't manufacture. The first four minute mile, the first iron man triathlon, and the first world's strongest man all took place before 99% of today's companies even existed. What does this prove? None of this stuff is necessary.

Inside Hero Maker, Duffy Gaver shares the knowledge and motivational sit-downs that get his stars to take hold of their own bodies. None of these stars bought their way to their impressive physiques; they earned it with old fashioned work and dedication. He will tell you what you need to do to look super heroic, and he will show you how you too can do this if you put yourself to the task. Inside, you will also find some of his game-changing workouts to help get you there.